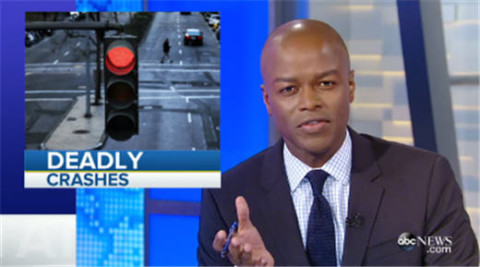 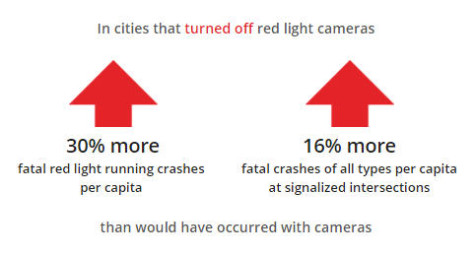 Cities that switched off their red-light cameras between 2010 and 2014 saw a 30 percent increase in the number of fatal red-light-running crashes, a new Insurance Institute for Highway Safety study says. Meanwhile, cities that turned cameras on saw 21 percent fewer fatal red-light-running crashes than they would have otherwise, the study says. Red-light cams affect other types of dangerous driving behavior, too. Read IIHS news release and report here. (ABCNews.com image and IIHS image) 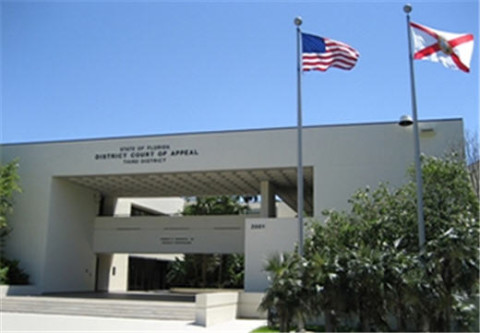 Urging the state Supreme Court to take up the controversial issue, an appeals court Wednesday rejected a motorist’s argument that a South Florida city had given too much authority to a company that operates red-light traffic camera programs. In a 29-page ruling Wednesday, the 3rd District Court of Appeal upheld Aventura’s program, which it said relies on police officers — not the private contractor — to make decisions about ticketing motorists. View court ruling here. See related article at the Miami Herald. Read ATS news release here. (Florida Third District Court of Appeal image)

With the city of Amarillo’s red-light camera contract approaching renewal, ABC 7 looked at the crash data and found fewer crashes over six years. The review looked at four of the eight cameras in place at the same intersections for six years. In that time period crashes fell from 24 to eight at one intersection; from 22 to two at another location; and from nine to zero at two other separate intersections. 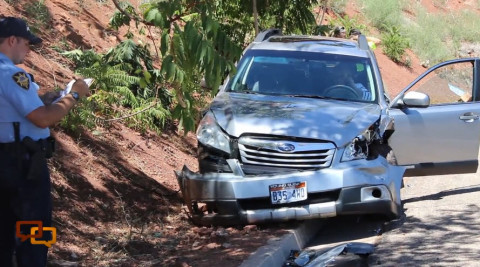 Running a red light resulted in twisted metal and vehicle tows for two motorists in St. George on July 23. A Subaru traveling south ran a red light and collided with a westbound Honda, according to St. George Police officer Colby Carter. … Both vehicles sustained significant front-end damage, while both drivers reported minor scrapes. The driver of the Subaru was cited for running a red light. (St. George News image) 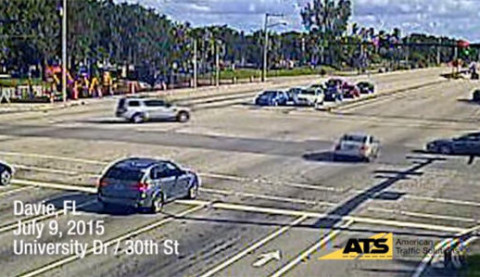 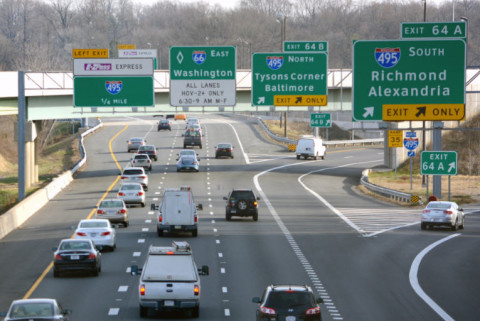 Drivers on Interstate 66 inside the Capital Beltway this summer are going to notice the first signs of the project that will bring tolling to the rush-hour lanes next year. Virginia Gov. Terry McAuliffe is scheduled to attend a groundbreaking ceremony for the project Monday. … This part of the work is mostly about setting up the gantries and other support equipment for the tolling system. (WTOP-Radio 103.5 FM image by Dave Dildine) 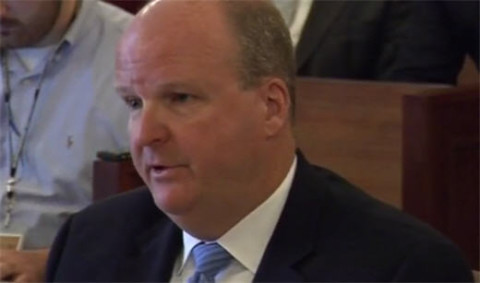 Speaking to fellow transportation officials from across the country and around the world, Massachusetts highway administrator Thomas Tinlin defended the Bay State’s coming switch to all electronic tolling on the turnpike. He said the move will decrease congestion on the roads and increase air quality as well as safety. Toll booths lead to higher crash rates, according to Tinlin. Read related coverage by The Boston Globe. (WWLP-TV Channel 22 image)

We think all school systems with bus fleets — we’re of course focused on the ones in Northeast Alabama — should find a way to make it happen with school bus safety cameras. … One would think sheer common sense and a hesitance to put a child getting on or off a bus in jeopardy would ensure compliance. However, a state Department of Education official said a survey showed 1,361 illegal passings during the last school year, one for every 280 miles traveled by school buses. That’s just wrong. The only acceptable number for this scenario is zero — period.

“I thought they were a bad idea. They have absolutely lowered accidents, and I’m supportive of them now.”
Paul Harpole, Mayor of Amarillo, Texas
KVII-TV ABC 7 (Texas), July 26, 2016

“With the cameras helping to enforce traffic laws, our officers have more time to focus on drunken and reckless drivers, to respond to significant crimes and to target other serious crimes.”
Derek Meyer, Interim Police Chief, Windsor Heights
The Des Moines Register (Iowa), July 21, 2016

National
Red-light camera programs in 79 large U.S. cities saved nearly 1,296 lives through 2014, according to the Insurance Institute for Highway Safety. The institute’s new study also looked at 14 cities that ended their camera programs between 2010 and 2014 and found the fatal red-light running crash rate was 30 percent higher than it would have been if the cameras remained in operation. Source: Insurance Institute for Highway Safety news release, July 28, 2016.