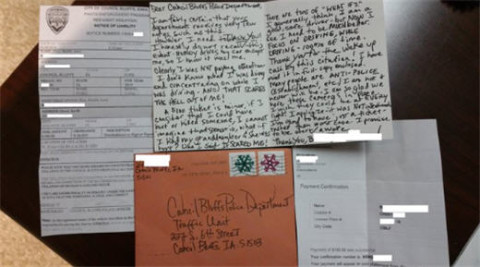 A driver, who was ticketed for running a red light, mailed a thank-you note to the Council Bluffs Police Department in Iowa, who then posted it on Twitter. The driver writes, “A $100 ticket is minor if I consider I could have hurt or killed someone. I cannot imagine that scenario. … I generally think I am a good, safe driver, but now I see I need to be much better.” View letter here. (Council Bluffs Police Department image)

New numbers released by the Seattle Police Department show, on average, more than 100 red-light running citations are dished out every day in the Emerald City. And you can expect that number to go up. … The Seattle Department of Transportation is in the process of pulling data from suspected “problem” intersections to see where more cameras could be most effective. 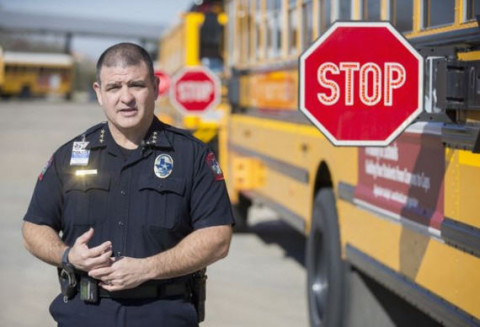 More than 1,000 drivers have passed school buses illegally since the Austin district began capturing violators with new bus-mounted video cameras on Jan. 7. The violators were captured during the district’s 30-day grace period. However, Austin District Police Chief Eric Mendez said his department is reviewing video for violations now, and the first batch of tickets for those who passed buses on or after Feb. 8 will be mailed soon. See related video coverage at KXAN-TV NBC 21 and KTBC-TV Fox 7. (Austin American-Statesman image) 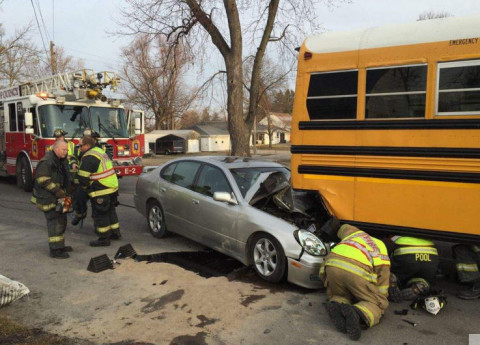 A Quincy woman was arrested in connection with a Tuesday crash involving a Quincy School District bus. Authorities say the driver was arrested for failure to reduce speed to avoid an accident after her 2002 Lexus slammed into the rear of a school bus that had stopped to pick up children. (Herald-Whig image by Steve Bornstedt)

ATS_RoadSafety @ATS_RoadSafety #SpeedKills. Speeding affects the risk of a crash occurring by having less time to react & ability to steer safely!

Nearly every toll road in the United States is electronic. New toll roads (yes, they are growing) are universally electronic. Most of the older toll roads have replaced their toll plazas and manned booths with the technology. … Meanwhile, in New York, we have one of the last toll roads with manned toll plazas. … What is clear in New York is that an all electronic Thruway is long overdue.

According to the National Association of State Directors of Pupil Transportation Services, school buses displaying red flashing lights are passed illegally about 16 million times a year in this country. Such driving behavior is illegal in every state, and yet, very few citations are issued for it. But that may be changing, as more towns join the trend of installing cameras on school buses to catch scofflaws.

Letter to the Editor: Red-Light Cameras Are Worth It
Daily Herald (Illinois), Feb. 23, 2016

What’s all this crying and threatening? The law came first then the cameras. Repeal the law! If the cameras save a life, your child or spouse, wouldn’t it be worth it to compel some of the drivers to abide by the law?

“The number is very shocking. If we’re capturing a thousand off of one hundred buses, you can imagine with all 300 buses we’re going to have 3,000 violators, or more. So we really want the word to get out to our drivers, you see the buses, you see the red flashing lights, stop for those buses while they’re loading or unloading.”
Eric Mendez, Austin Independent School District Police Chief
KXAN-TV NBC 21 (Texas), Feb. 25, 2016