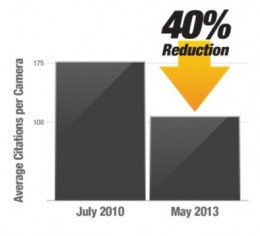 Are we getting used to red light cameras? A recent report says fewer vehicles are being cited for multiple violations. See related coverage from Digital Journal.

Photo radar in school zones has the support of Staff Sergeant Pat McTiernan of North District Traffic Services. “I think anything that will improve safety in our school zones for the youngsters is something we have to look at we have to support.” 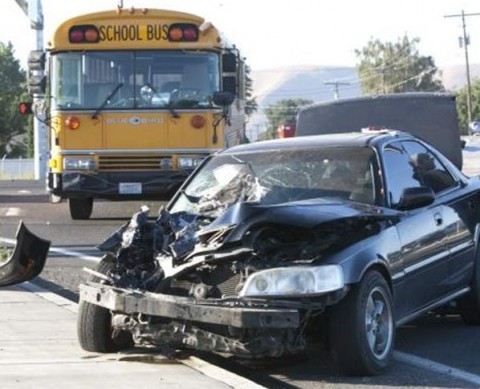 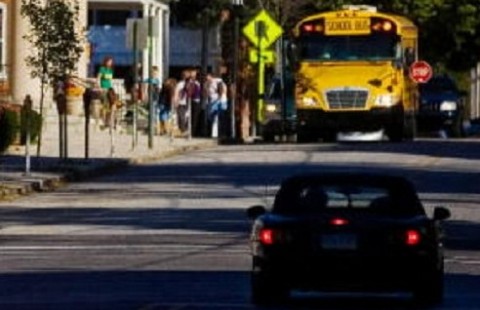 Rep. Seth Grove, R-Dover Township, has proposed a bill to add video cameras to the extending arms on school buses to capture photos of the license plates of those who disobey the law. About 1,000 motorists per year violate the School Bus Stopping Law, which carries a 60-day driver’s license suspension, five points on the offender’s driving record, and a $250 fine. (The Evening Sun photo by Shane Dunlap)

Paulding County Schools will partner with American Traffic Solutions (ATS) to deploy CrossingGuard, ATS’ new technology to help school districts address the growing problem of illegal passing of school buses that are stopped and boarding or disembarking children, according to a news release from the Paulding County Sheriff’s Office.

A Democrat and Chronicle review of three years’ worth of state Education Department data concerning school bus crashes and injury accidents shows that the greatest danger posed to students on school buses comes from other motorists on the roadways. … Estimates by the state Association for Pupil Transportation are that motorists pass stopped school buses at least 64,000 times every day in New York alone, with buses being passed on the right side — where children get on and off — about 2 percent of the time.

In Everett, 67 drivers blew through the blinking lights and stop signs that flip out from the side of school buses — in just one day. In Mukilteo, it happened 24 times. And in Marysville, 18.  … Although the survey was just a one-day snapshot, “it happens all the time,” said Andy Muntz, Mukilteo School District spokesman. “People go on around the bus anyway.”

This year, on the 90th anniversary of its patent, here’s my nomination for an electronic device that everybody recognizes as essential, yet it remains universally disliked: The traffic light. … As all drivers know, occasional electrical malfunctions aren’t the only danger they face at traffic lights. The chances of getting broad-sided by a red-light runner, for example, are much more likely than a crash caused by an outage, a flood or worn-out wiring.

Most people know what it means when a school bus comes to a halt, red lights flash, and a stop sign swings out from the driver’s side. … It’s about children’s safety; most everyone understands this and obeys Pennsylvania’s School Bus Stopping Law. Yet about 1,000 people a year are in too much of a hurry and ignore the stop signs.

Like motorists who blow through red lights, the ill-advised effort to unplug Florida’s red-light camera law simply doesn’t stop. Last week, state Senate Transportation Chairman Jeff Brandes filed a measure to repeal the Mark Wandall Traffic Safety Act of 2010. The St. Petersburg Republican’s bill likely won’t be the last one filed to kill the law that allows communities to use red-light cameras. It should be.

The Wilmington City Council voted again last week to extend the red-light camera program, in which electronic watchdogs click photos of drivers who blow through stoplights. The cameras cost the city about $300,000 a year; New Hanover County kicks in about $180,000. Nevertheless, Wilmington officials remained committed because of the evidence that the cameras’ presence helps reduce accidents.

To do away with red-light cameras would be stupid. Everyone who is caught by this device is entitled to go to court and protest the fine. So some drivers got their egos slapped. So what? Look at all the good the cameras do, as well as the accompanying signs that urge caution at these intersections.

“I don’t really see how that becomes any kind of issue with privacy. You have someone breaking the law and putting the lives of children at risk.”
Lloyd Smucker, Pennsylvania State Senator
York Dispatch, Sept. 25, 2013

“One of the scariest times I ever had as a bus driver was when I had one girl at Latta Road who was going to cross in front of me to go to an apartment complex, and I kept telling her that she had to look at me, look at me so I could give her the signal to cross. Anyway, she started to cross while not looking at me and I saw this car that was comin