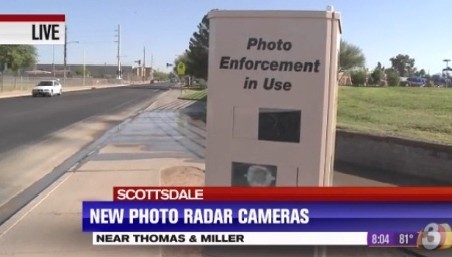 The Scottsdale Police Department is deploying a new kind of photo-enforcement tool called a portable school tower. Designed specifically to increase safety in school zones, the devices are about the size of a phone booth and can be moved easily to different locations as needed. See related coverage from KTVK. 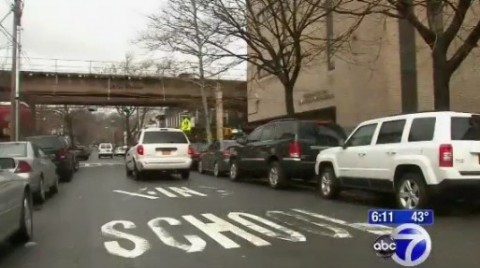 State lawmakers have voted to allow New York City to install 20 speed cameras, all of which will go up near schools. …  The first round of cameras will be installed near schools where it’s been documented that at least 75 percent of drivers broke the speed limit. See related coverage from The New York Times, City and State and Home Reporter News. Read Mayor Bloomberg’s statement.

School-zone speeders could soon end up with citations in their mailboxes, thanks to the Memphis City Council’s decision to install the city’s first-ever speed cameras near local schools. The city already has 25 red-light cameras in use to nab red-light runners, but the 150 cameras to be installed this summer will be the first to target speeding. 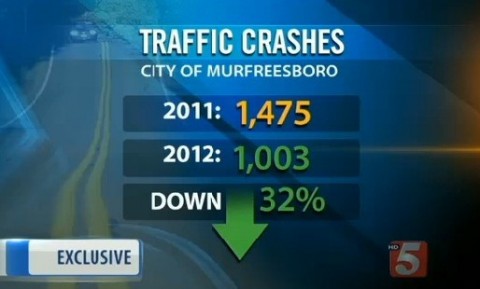 The Murfreesboro Police Department released two recent videos recorded by red-light cameras at busy intersections in the city because they are good examples of drivers simply not obeying the rules of the road. The first showed the compact car getting T-boned and flipping.

This driver slices through traffic and avoids two collisions to run a red light. Police selected this event as the red-light runner of the week, and will issue the driver a $158 fine.

The Des Moines Police Department is using fines from red-light and speed violations caught on camera to help fund a special “burglary detail” to fight an increase in burglaries. After making 125 arrests and recovering 27 stolen vehicles among other items in five months, the department has decided the keep the squad intact indefinitely. See related coverage in Des Moines Register. 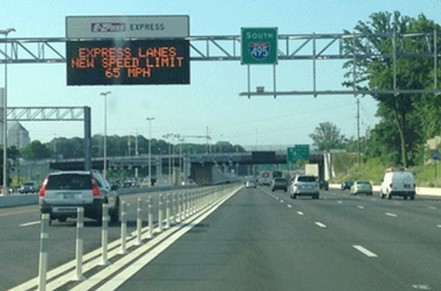 A definite rise in vehicle numbers is noted in the past month along Transurban’s 495 Express Lanes, where the posted speed limit is now 65 mph, up from 55 mph just this week. Experts say the higher speed is likely to attract more users and improves a great travel option. The adjoining untolled or general purpose lanes remain at 55 mph. (Photo by Andrew Mollenbeck, WTOP News.)

Mayor Rahm Emanuel’s speed cameras will be installed in August near 50 Chicago schools and parks — and start churning out $35 and $100 tickets in September, City Hall said Friday after finalizing a contract with an Arizona operator. “We should have a signed contract any day, and then we’ll be off to the races,” said Transportation Commissioner Gabe Klein. 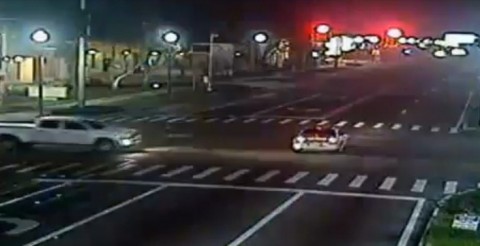 In a short sampling of 48 hours’ worth of video at three intersections on Lancaster Avenue, Police Committee board members saw multiple vehicles zipping through an intersection after the signal had turned red. Many took right turns, barely slowing down. Some hooked lefts, in front of opposing traffic. … As the behavior repeated, and repeated, and repeated, the realization sank in: “Guys, this really isn’t funny.”

@transalt The @NYSenate has PASSED the #SpeedCamera bill! A major victory for #NYC’s children, who will now be protected from speeding in school zones.

American Traffic Solutions is pleased to announce that Clayton County, Georgia, an ATS client since 2011, has renewed its red-light safety camera agreement for another year, through June 2014. ATS is honored to remain a part of Clayton County’s traffic safety program.

ATS Thanks Fans as Its Social Madness Run Ends; Continues ‘What Drives You’ Contest

American Traffic Solutions wants to thank everyone who voted for ATS in the Phoenix Business Journal’s Social Madness Challenge. Your support moved us into the second round of competition, and helped us spread the word about traffic safety. Unfortunately, we don’t get to advance to the next round, but our own national competition continues. ATS wants to know What Drives You. Simply visit our ATS Linked In, Facebook or Twitter sites to share your story. Three judges will pick the most compelling story and award a Kindle Fire to the grand prize winner once the contest closes on July 3. ATS is committed to making life safer and easier on the road ahead. That’s what drives us! Tell us today what drives you!

The National Coalition for Safer Roads commends the Governors Highway Safety Association’s release of a report highlighting the dangers of speeding among teen drivers, and agrees with the report’s recommendation for the use of automated traffic enforcement to reduce teen speeding. View GHSA report here.

As everyone knows, the radar detector is a device that allows drivers to break the law. My question is, why haven’t Louisiana lawmakers passed a law to outlaw these things that encourage a lot of drivers to drive faster than the posted speed limit.

Red-light runners have become commonplace within the city, and the decision to remove red-light cameras has only aggravated the issue.

“I think people are going