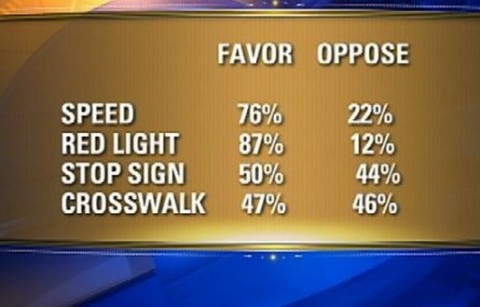 Following their use in identifying the suspected perpetrators of the Boston Marathon bombings, Americans strongly support the use of surveillance cameras in public areas and believe they help reduce crime.

A bill that would ban the use of red-light and speed cameras to enforce traffic laws on Ohio roads had its third airing before lawmakers Tuesday, and law-enforcement officials from around the state implored a committee to cast out the legislation.

Minnesota lawmakers are considering a bill that would allow cities in the state to use automated stop light enforcement cameras.

Six months after shutting down its red-light cameras, a West Tennessee city is putting them back up. City administrator Patrick Lawton said the city never intended to abandon the program, and that officials are pleased with the benefits, especially the reduced number of serious accidents. See related coverage in The Commercial Appeal. 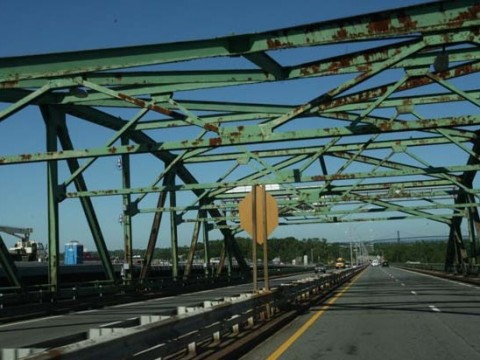 Rhode Island Turnpike and Bridge Authority directors under pressure from shrill populists and special interests to abandon plans to toll the Sakonnet River bridge reaffirmed the start of tolling July 1 in a vote Wednesday. Funds are needed for maintenance costs. See related coverage in The Providence Journal. (The Providence Journal photo by Frieda Squires) 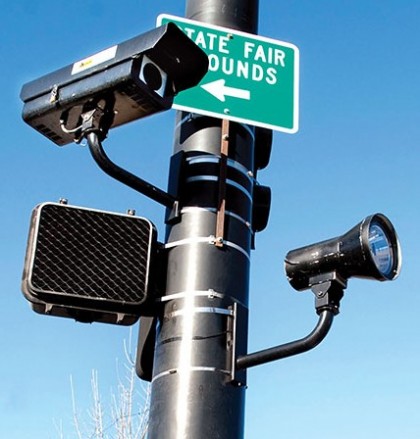 Pueblo is cracking down on drivers who zoom through red lights. The city already has traffic cameras planted at two intersections, and the city council has approved three more locations. (File photo by The Pueblo Chieftain.) See related coverage in The Pueblo Chieftain.

Four cars run this red light at the Gulf to Bay Boulevard and Belcher Road intersection in Clearwater, qualifying as the city’s worst red-light camera violation event of the week.

This week’s post by the St. Petersburg Police Department involves a string of red-light runners and close calls at intersections.

The Illinois Senate has approved legislation to allow school districts to use cameras to catch people who don’t stop for buses picking up or dropping off kids. Lawmakers voted 36-12 in favor of the bill, which now moves to the House.

Get Involved in Saving a Life: Sharing a Tweet is a convenient way to inform others about the dangers of red-light running. Another way is to direct drivers to the ATS YouTube page, where visitors can watch informative videos about road safety camera programs and see the dangerous crashes hundreds of communities are trying to avoid by installing red-light safety cameras. Seeing is believing, which is why ATS invites you to visit our links at the end of this newsletter and share the message to stop on red.

I stood at Whitewood and Hot Springs intersection for about an hour this week to see what all the controversy’s about. In that time, while turning left from Whitewood on to Murrieta Hot Springs, a dozen drivers were in the intersection when the light turned red. Of drivers traveling east-west on Murrieta Hot Springs, three were in the intersection when red hit. I don’t know how many of these people deserve a ticket. But I know a few created dangerous situations just in the space of an hour.

On Thursday afternoon, the FBI released photos and video of two persons of interest in the Boston Marathon  bombing. Surveillance cameras turned out to be their undoing. We should see this as a sign of the virtues of video surveillance. More than that, we should think about how cameras could help prevent crimes, not just solve them.

The two bombs that killed three people and injured scores of others at the Boston Marathon remind us that there is no easy way to prevent the evil of terrorism. However, we can make the task of finding those responsible easier. Unfortunately, we often make it unnecessarily difficult for law enforcement agencies to do their jobs.

I do read the Daily News and was very unhappy reading the articles on the discontinuance of the red-light cameras. Now, once again, the red-light runners have returned.

In 2012, 1,310 people were killed in motor vehicle collisions in Pennsylvania; 65 people were killed right here in Bucks County. Three Bucks County communities — Falls, Middletown and Warminster — are among local municipalities  eligible to consider red-light cameras to help enforce red-light violations under a new state law enacted over the summer. Red-light cameras have been proven effective.

“We need to take advantage of this technology. We’ve seen just the presence of the technology cut down on violations. We’ve seen an overall downward trend in our accidents. I believe it’s made our streets safer.”
Jeff Sulewski, Lieutenant with the Toledo Police Department
Cleveland Plain Dealer (Ohio), April 23, 2013

Colorado
Since red-light safety cameras became operational in Pueblo in 2009, 97 percent of all the people who got a ticket in the city’s two monitored intersections never got a second ticket, prompting police to say the cameras are working. Source: KRDO-TV NBC 13, April 24, 2013.