Speed cameras and red light safety cameras are effective deterrents to fatal roadway crashes, which fell to their lowest number since 1949, according to Barbara Harsha, executive director of the Governors Highway Safety Association. Harsha included the camera programs in her list of changes that helped protect lives on the nation’s roads in 2010. The number of people killed in roadway collisions dropped to 32,788 in 2010, the lowest total in more than 60 years, the National Highway Traffic Safety Association announced on Friday. “The big reasons (for the decline) are programs aimed at driver behavior, safer vehicles and safer roads,” Harsha said.

In a separate statement, David Kelly, executive director of the National Coalition for Safer Roads, expanded on the role road safety camera programs have on changing driver behavior, and making traveling safer in the United States. Read statement.

The 9th U.S. Circuit Court of Appeals issued a unanimous opinion validating the legality of service contracts between cities and safety camera companies. Issued on March 31, the ruling confirms what clients and communities have long held, that photo enforcement is a legal, successfully proven method to enhance road safety. Read statement. 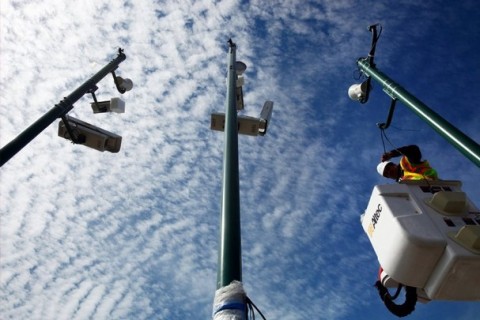 Lake in the Hills, Illinois, has signed a one-year contract extension with American Traffic Solutions as its red light safety camera vendor.

Colorado Springs police will put their new mobile speed van to use this month. Speeding drivers will receive warnings as of April 5. Officers will issue tickets starting May 5. School zone violations carry an $80 fine. ColoradoConnection.com, March 30, 2011.

Orlando City Council members voted this week to add five red light safety cameras to some of its busiest intersections. There are 17 cameras installed. WFTV.com, March 29, 2011. 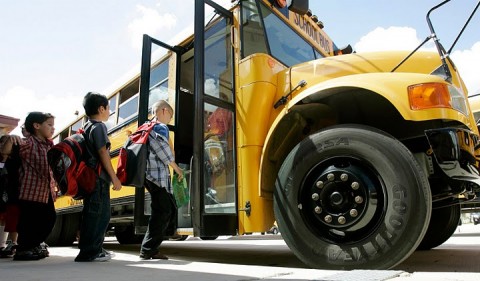 AP photo
Children board a school bus in Washington State where officials are discussing whether to use cameras to enforce traffic laws for the protection of students around school buses.

A bill motoring through the Legislature would allow school buses to be equipped with automated cameras that snap pictures of the offending vehicle’s license plate and forward them to law enforcement.

Legislation introduced on Tuesday would allow Delaware municipalities to install camera systems to catch speeding drivers within a quarter mile of a school or work zone.

I’m appalled every time I pass through a school zone (or more importantly, pass through my kids’ school zone) and constantly see cars going 10-15 mph over the speed limit.

Police say the motorcycle rider ran a red light and collided with a pickup truck on Tuesday afternoon. 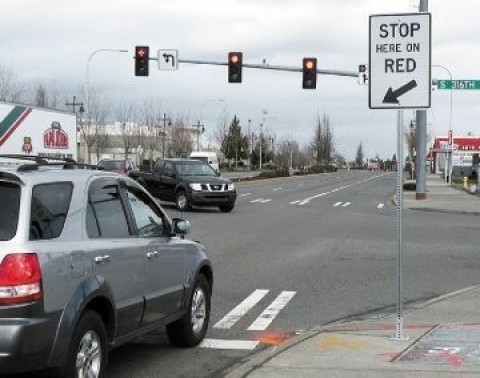 Signs warning “Stop here on red” are popping up at some of Federal Way’s busiest intersections to remind drivers to make complete stops at red-light, right-hand turns so they don’t hit pedestrians.

This nonsensical repeal drive — fueled by specious concerns over privacy, errant ticketing and the devices doubling as municipal moneymakers — would put Florida back on a deadly road.

Every parish expects its chief law enforcement agency to provide proper traffic enforcement. Though it is deemed not catching “the real criminals,” it does act as a deterrent to those traffic lawbreakers who would love to have no enforcement.

Sometimes I wonder whether Ohio’s laws on traffic lights say: “Green means go on through. Yellow means hurry up. Red means floor it.” That’s how it seems when you’re sitting at a Toledo intersection, waiting for the light to change, and somebody in a hurry races through on his red.

A state legislative panel deferred action last week on a bill to no longer require motorists in Tennessee to come to a complete stop before turning right at a red light. … Send this bill directly to the dust bin.

No one is looking at the safety problems that the naysayers to red light safety cameras should be aware of. The only things that they are focusing upon is the probability that they will be ticketed for a minor traffic infraction that can and will kill someone. Rolling stops also are extremely serious and illegal.

Since 2008, the city has used controversial cameras to catch red-light runners and speeders. A recent push to halt the program ultimately failed, and in the time since, the city has added more cameras, stirring mixed emotions across town.

“There is absolutely no downside to moving forward with getting this technology in Ocean. It could only be a benefit in reducing the carnage at those three intersections.”
Antonio V. Amodio Jr., Ocean Township police chief
Asbury Park Press (New Jersey), March 29, 2011

“As a father, it’s frustrating to see it. People are violating the law. People are not getting caught and this is about protecting our kids.”
Steve Hobbs, Washington state senator and sponsor of legislation to use cameras on school buses to detect traffic violators.
The Herald (Washington), March 30, 2011</s