A public awareness campaign was launched this week  to highlight the lifesaving benefits of intersection safety programs across the state of Florida. The new campaign, known as Stop On Red, includes a compelling new public service announcement that can be viewed at http://stoponred.org/

What people around the region are saying about red light cameras. Washington Post. wapo.st/ghY4RU

Despite pressure to put the brakes on a red-light safety camera plan, the mayor of Sunrise Florida presses ahead with the plan he says will save lives. The attached video shows the dangers drivers face on the road from red-light runners. See video and article. The Sun Sentinel (Florida), Feb. 23, 2011

The free ride could be over for people challenging tickets they get from unmanned cameras for running red lights in West Palm Beach. Unlike last month, when nearly everyone left court smiling and waving papers that showed their tickets had been dismissed, most who appeared before a traffic hearing officer Tuesday were ordered to pay fines and $106 in court costs. See video and article.  Palm Beach Post (Florida), Feb. 23, 2011

Austin police say red-light running collisions are on the decline at intersections with red light safety cameras, but the message in their recently released video is that the danger remains all too real. See video and article.  KTBC-TV 7 (Texas), Feb. 22, 2011

An 11-year-old girl is dead after a speeding truck ran two red lights and collided with three vehicles outside a mall in Arizona. The girl’s mother and brother were taken to the hospital. See video and article. KTVK Channel 3 (Phoenix), Feb. 21, 2011

Drivers and a pedestrian say they’re all for red light safety cameras in Springfield, Mass., where city councilor James Ferrera wants to use the cameras to catch red-light runners. See the video and article. WWLP NBC 22 News, Feb. 19, 2011 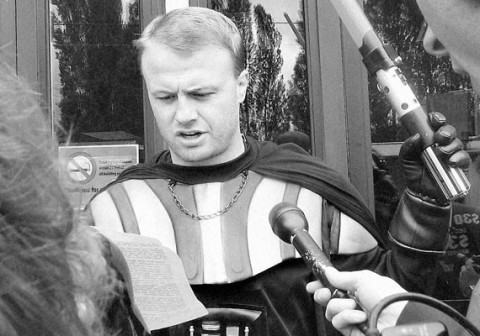 Will Tim Eyman Stop at Nothing?
OneStopNewsStand.com, Feb. 24, 2011

Initiative profiteer Tim Eyman [known for dressing up as Darth Vader and other outrageous media stunts] seems determined to rid Washington’s intersections of red light safety cameras, even if it kills him. Or you. Or the 700-or-so Americans who die each year due to red-light running.

Law officers from cities that operate speed and red light safety cameras made a show of force Tuesday at the Statehouse in support of the automated traffic-enforcement systems.

Sen. Joseph Brannigan, a Portland Democrat, wants to reverse the state’s 2009 ban on the use of red light safety cameras to catch those who go through an intersection without stopping.

Broward County commissioners said Tuesday they did not like a proposed state law that would yank the wheels off red light safety camera enforcement programs.

This media package delivers video and news articles about Los Angeles’ success with its road safety camera program. Since 2004, when the program began, there has not been a single fatality at intersections with safety cameras.

The red light safety cameras installed in Haines City could add hundreds of thousands of dollars to city and state coffers in less than a month. Preliminary figures show 7,066 citations have been mailed out since the cameras were activated Jan. 14 at five intersections, billing violators more than $1.1 million from the $158-per-ticket fines. Two cameras are at each intersection. And more are on the way.

New uniforms for motorcycle officers, new traffic signs, and new photo radar equipment in Little Elm, Texas, will be paid for from the red light safety camera budget, which is estimated to bring in about $360,000 this coming fiscal year.

Coroner’s officials have identified the man who died Thursday morning as his work truck rolled over after colliding with a car at a Palm Springs intersection.  Witnesses told police the truck driver ran a red light.

Most arguments against photo enforcement don’t hold water. Police have used radar to catch speeders for decades. Traffic cameras and so-called “robo cops” parked by the side of the road do the same thing. The only difference is that an expensive law enforcement officer is not spending time sitting in a patrol car to operate the radar or camera system.

The Desert Sun applauds Cathedral City for having the courage and good sense to use red light safety cameras. Other cities should consider them. And drivers, use common sense. No matter where you’re going, the important thing is to make sure your journey is safe for yourself and others.

After much reading and considering, I have concluded that those complainers are the ones guilty of committing the offenses that the red-light and speed cameras hope to eliminate.

“The point of the system is to get people to slow down, not to cite them. We’re not sneaking around, jumping out from behind a billboard and scaring people.”

Rear-end crashes fell 63 percent from 2004-2009 at intersections with red light safety cameras, according to a report to the Los Angeles Board of Police Commissioners. Source: KABC-TV Channel 7, Los Angeles. Feb. 22, 2011.

East Cleveland’s new road safety program cameras snapped action shots of more than 8,900 red-light runners and speeders during December and January, the initial two months of an expanded photo enforcement program in the community. That equals a potential citation every 10 minutes. Source: The Plain Dealer, Feb. 20, 2011.

According to the Insurance Institute for Highway Safety, 22 percent of all traffic accidents in the U.S. are due to running red lights. Source: WWLP NBC 22 News (Massachusetts), Feb. 19, 2011.