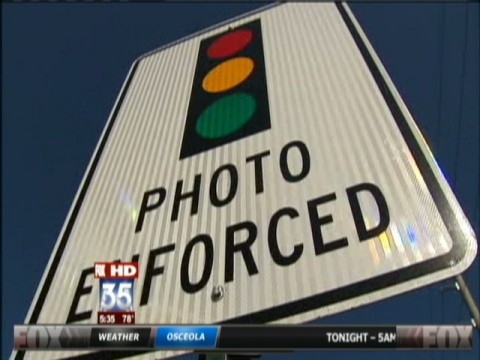 Road signs, press conferences and news stories are all a part of the public awareness campaign in Orange County, Fla., where 10 new intersection safety cameras are in place to issue warning notices to drivers who run red lights. Citations will be issued beginning Feb. 28. Photo by Fox 35 WOFL, Jan. 24, 2011.

Every year, red-light running injures 6,000 people and kills more than 100 in Florida, but intersection safety cameras cut those numbers nearly in half, says this news broadcast announcing the start of 10 new cameras in Orange County. See the video and article. NBC Channel 2, WESH, Jan. 24, 2011.

Orange County, Fla., Mayor Teresa Jacobs reminds the public that the new intersection safety cameras are in place to save lives. See the video and article. Fox 35 WOFL, Jan. 24, 2011

Hillsborough County breaks down how its revenue from red-light running fines is spent on road repairs, sheriff’s office, parks and other services. See the video and article. Fox 13, WTVT, Jan. 24, 2011

Police explain why drivers need to stop on red in Kansas City even when weather is snowy. See the video and article. NBCActionNews.com, Jan. 24, 2011

Tucson’s next set of red-light enforcement cameras will begin snapping photos of red light runners at noon Friday. The red-light cameras at East Broadway and North Craycroft Road will capture images of motorists who violate two intersection-related violations: failure to stop for a red-light signal and speeding on the approach to the intersection.

The Opelika city administration is in the process of initiating a legislative act that would allow the installation of red-light cameras at dangerous intersections. … “We’ve talked to the Montgomery Police Department who has this system installed at the present time, and they are quite pleased with it,” Opelika police Chief Tommy Mangham said.

Hundreds of Red-Light Runners Get Warnings in Longview, Wash.
The Daily News, Jan. 26, 2011

Longview police have sent out more than 300 warnings this month to red-light runners caught by the city’s new red-light traffic safety cameras. By the time all pending warnings are issued, police say, more than 400 violators will have been caught by cameras at three intersections during the monthlong “warning period.”

Cameras have recorded devastating proof of how dangerous running a red light can be. Now, Orange County is turning to red-light cameras to avoid dangerous crashes. “This program is not about collecting fines. It’s about preventing injuries. It’s about saving lives,” said Orange County Mayor Teresa Jacobs.

I am in favor of the red-light camera tickets. Come on people! Obey the laws, drive sanely, and you won’t get a ticket.

Red-light cameras are used in 20 cities in Tennessee, including Murfreesboro, and we hope the system is here to stay. … And while some state lawmakers are considering regulation on the operation of the cameras and even an outright ban, we say why not punish those who break the law and put the lives of others in danger? If you don’t like the cameras, don’t run red lights.

My car is idling at the red light and I am at the front of the line. The light turns green, and in an orderly, rational universe, my next action should be to put my foot on the accelerator and make my way through the intersection to my destination. If I do the rational thing, however, I will T-bone the handful of cars in front of me that is crowding the intersection waiting to get onto the 15 north. But what’s this? Five more cars turn left on the red light to make their way to the far right lane leading to the freeway. … If there was a ray gun waiting to zap them into vapor if they ran the red, they’d think twice. Sadly, red-light ray-gun blasters don’t exist. But red-light cameras do. When, oh, when is Temecula going to get some of those?

Red Bank has been the brunt of criticism and jokes, but there’s no other place in the Chattanooga area that I feel safer.

@icbc has a road safety #flipbook! An easy and interactive way to educate yourself about road safety! Check it out: bit.ly/fdHyjB

This program is doing exactly what it was intended to do, and that is to save lives.”

Side-angle crashes at six of Murfreesboro Tennessee’s most dangerous intersections fell by a total of 58, or 17 percent, between 2008 and 2009, the first and second years in which the cameras were in operation, according to Murfreesboro Police Department statistics. Less dangerous rear-end crashes went up by a total of 17 wrecks, or 3 percent, to 588 in 2009 compared with 571 in 2008. Total crashes, including rear-end collisions, side-angle collisions and other collisions have fallen by almost 5 percent, from 926 in 2008 to 885 in 2009. Source: Daily News Journal (Tennessee), Jan. 25, 2011.